Famous Gymnasts – Gabby Douglas and Her All Records and Achievements

Gabby Douglas, whose full name is Gabrielle Christina Victoria Douglas, is an artistic American gymnast, born on December 31, 1995 at the Newport News, Virginia.

She began her training at the age of 7, only to become the first African American who succeeded in winning a gold medal in the individual all-around and team competitions at the 2012 London Summer Olympics, ten years later.

Her extraordinary results at such a young age caught the Hollywood’s attention and her life story was turned into a movie, entitled “The Gabby Douglas Story.”

She even has her own reality show called “Douglas Family Gold.”

In 2008, Gabby Douglas debuted at the US Classics in Houston, Texas, where she earned 10th place. In 2009, she suffered an injury and was not able to compete with her full routines.

She managed to fully recover in 2010, when she joined the US National Team, helping it win gold medals at the 2011 and 2015 World Championships. 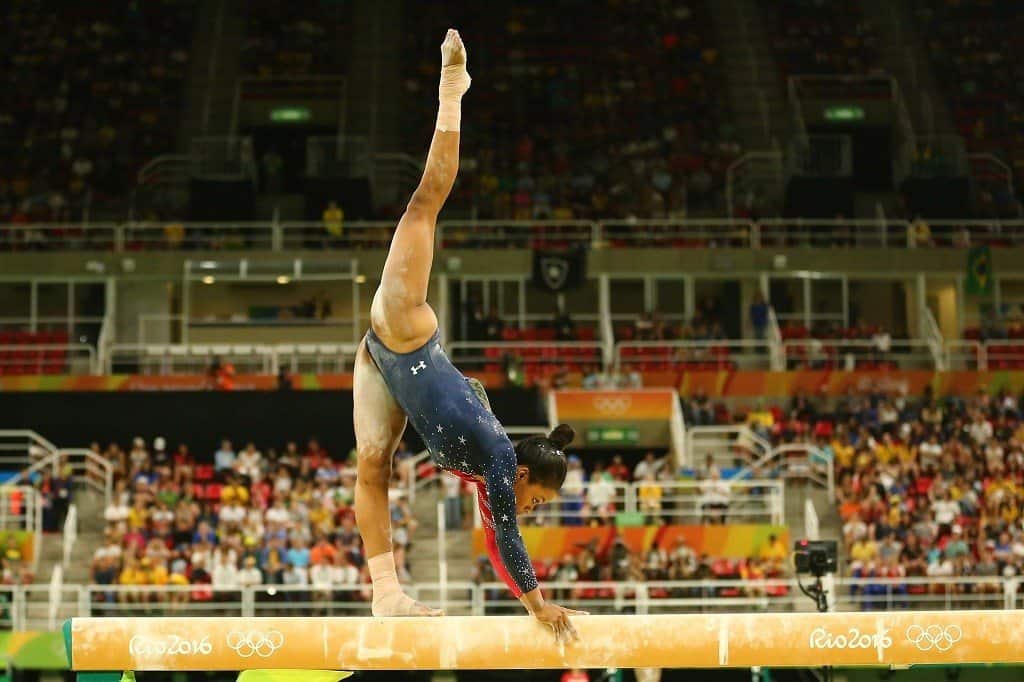 She has earned her place in the Olympic Team by placing 1st at the 2012 Olympic Trials and had become a focus of interest when she won London Olympics gold in both team and individual all-around disciplines.

She was an individual all-around silver medalist at the 2015 World Championship, 2016 AT&T American Cup and the Rio Summer Olympic Games team gold medalist.

Gabby Douglas says that her family gives her the strength to push through hard times and perform as best as possible. She has three older siblings, sisters Arielle and Joy and a brother, Jonathan.

Her mother, Natalie Hawkins-Douglas, bravely raised the family of four as a single mother and today, she is working as a full-time manager to her daughter, taking care of her career and giving her guidance, support and encouragement. 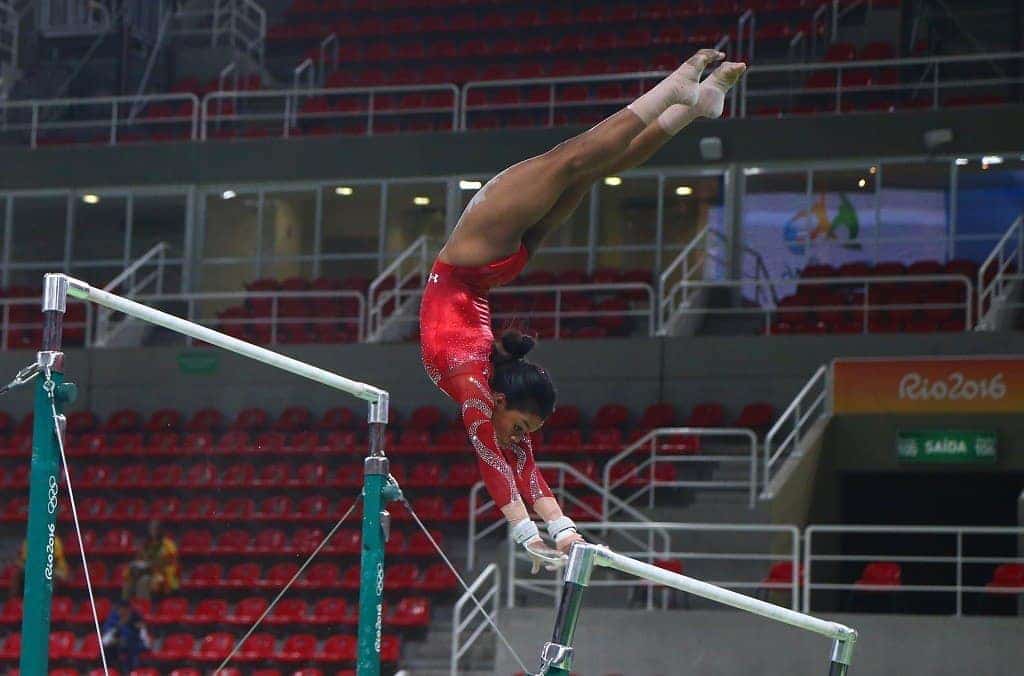 It is Douglas’ sister, who watched practice with cheerleading mats and could view top-rated ballet barres she performed, who actually convinced their mother to let her start taking gymnastic classes in 2002.

The things have evolved from there rapidly and Gabby left her family and moved to Iowa so she could train with coach Liang Chow when she was only 14 years old.

During the time spent there, she got to see her mother only four times and had to live with a family she had no previous connections with.

Today she draws her strength from her family, with her mother being the closest confidant and the biggest fan.

The athlete admits she may feel insecure from time to time, but pushes through, having in mind the advice given to her to “always keep fighting” and “never let others decide her future.”

The US Olympics Team winning gold in Rio was a very important achievement, as it was the first time the US women’s team had placed 1st at two consecutive Olympics.

However, this accomplishment was overshadowed by a controversy built around the fact Gabby Douglas had failed to place a hand over her heart during the medal ceremony, while the national anthem played.

Many people were enraged, finding her act inappropriate, rude and disrespectful. Some of them insinuated that she made this move to honor Michael Brown, an 18-year old black man shot by a white police officer, two years earlier.

The athlete never made a statement on these accusations, but she did apologize, writing on social media that she meant no disrespect.

What Is Her Favorite Discipline?

Gabby Douglas loves learning new skills and competing for the USA, her favorite two events being floor and the beam. 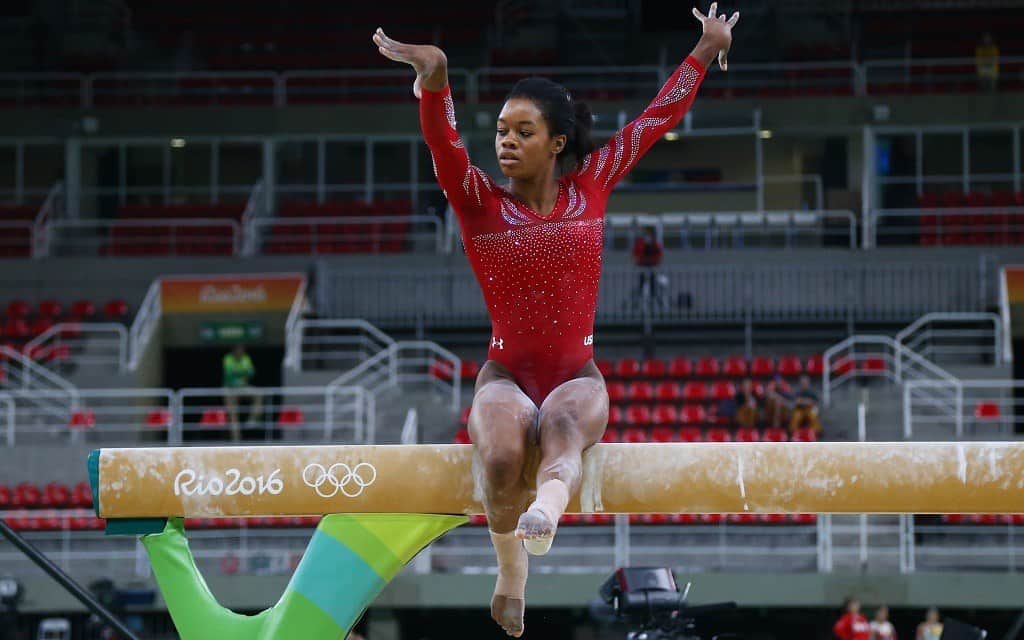 At the same time, she is a versatile young woman, active in many other spheres other than the gymnastics.

She enjoys spending her leisure time in reading a good book, listening and dancing to the beats of her favorite music and relaxing to the soothing skill of knitting.

She has also made an appearance in a Nintendo ad campaign for New Super Mario Bros. 2 and played a small role in the Disney XD series “Kickin It.”

In December 2012, she released an autobiography entitled, “Grace, Gold and Glory: My Leap of Faith.”

What Is Her Best Result?

The big sacrifice she has made by moving so far from her family at such a young age has definitely payed off, as she got her hands on the Olympic gold in 2012.

She was not only the first African American, but the first person of color competitor and the first US gymnast in Olympic history to become both individual and team champion at the same Olympics.

She was awarded the “Female Athlete of the Year” in December 2012 and received two “BET Awards” in June of the following year to honor her amazing accomplishments.

Gabby Douglas is an extraordinary young woman, a unique phenomenon and force of nature, showing us how strong will and dedication work together with talent on the journey of making dreams come true.

She has become a part of the Olympics and national history at the age of only 17 and she is just getting started.